ROLE OF MANGANESE
Manganese is essential as an enzyme activator which helps with nitrate assimilation. It is also primarily involved in photosynthesis and chlorophyll production. Manganese influences auxin levels in plants and is required for maximum activity of many enzyme reactions found in the citric acid cycle.

ROLE OF IRON
Iron is a constituent of ferredoxin and cytochromes, it activates catalase, and plays an important role in the formation of chlorophyll. It takes part in photosynthesis and in respiration for the release of energy.

To ensure even mixing, half fill the spray tak with clean water and add the required amount of product. Agitate thoroughly then add the remainder of the water. Agitate thoroutghly while carrying out spray operations. Reseal part-used containers immediately after use, the same applies for fertigation.

Keep out of reach of children. When handling or using this product avoid skin and eye contact, ingestion or inhalation of spray mist. Always wear protective gloves, goggles, hat and protective clothing. Should the product be ingested or symptoms or signs develop after contact with the product, contact your doctor. 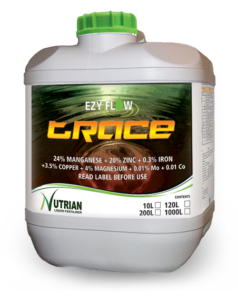