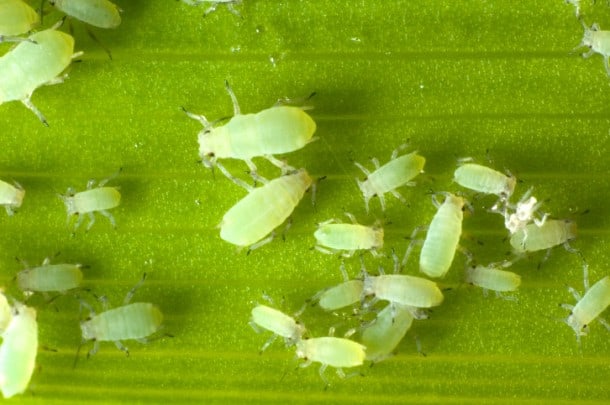 Aphids suck up an almost endless supply of sugary sap from their plant hosts. They can survive on this junk food diet because bacterial partners help them convert the handful of amino acids in the sap into other, essential amino acids–not by recycling them, but by breaking them down and rebuilding from scratch, a new study finds.

Scientists have long assumed that aphids either use these amino acids directly or convert their carbon skeletons into other amino acids, which they use to make proteins. But by following the fate of carbon and nitrogen atoms ingested by the aphids, BTI scientists Georg Jander and Meena Haribal found that amino acid synthesis takes a very indirect route. Their findings appear in the Journal of Experimental Biology.

“We were surprised,” said Haribal, a research associate. “We didn’t know that they would deplete everything and make it from scratch.”

To keep from starving, aphids have evolved a symbiotic relationship with a bacterium called Buchnera aphidicola, which helps to provide essential amino acids. Buchnera is an endosymbiont that can no longer survive independently outside of the aphid.

Haribal fed pea aphids (Acyrthosiphon pisum) a diet of sugar sap and amino acids containing heavier isotopes of carbon or nitrogen–rare atoms that have extra neutrons in their nuclei and thus higher mass–that can be detected using a mass spectrometer. She supplied the insects with the liquid by sandwiching it in between two layers of Parafilm, which the aphids accessed by poking their needle-like stylets through the film.

Once the aphids had incorporated the isotope-labeled amino acids into their bodies, their structures were broken up and analyzed with a GC-MS, which separates out the individual pieces and allowed Haribal to figure out where the heavy carbon and nitrogen atoms ended up.

Jander and Haribal saw that the amino acids inside the aphid’s cells were a mixture of heavy and light atoms, indicating that the plant amino acids had been completely dismantled and remade. Even aspartic acid, which the researchers supplied in bulk to the aphids, was broken down and reconstructed.

“Because they have an unbalanced diet, whatever amino acids they get, they just break it down and resynthesize,” said Haribal. She suspects that this strategy is a result of their limited diet, coupled with the fact that levels of amino acids can vary greatly within plants, depending on the available nitrogen sources. Breaking down all amino acids into their components to make essential amino acids and other molecules, such as DNA, likely evolved as the most efficient process.

Haribal is interested in exploring this phenomenon in other species. Many animals subsist on unbalanced diets but have gut microbes or symbionts that break down their diet and provide more nutrition. For instance, similar to aphids, cows can survive on a diet with an imbalanced amino acid content because their rumen bacteria contribute to the supply of these essential nutrients.

“Lots of insects feed on only one thing, so they have to have some way of getting a balanced diet,” said Haribal. “They have to get all the essential amino acids from somewhere.”