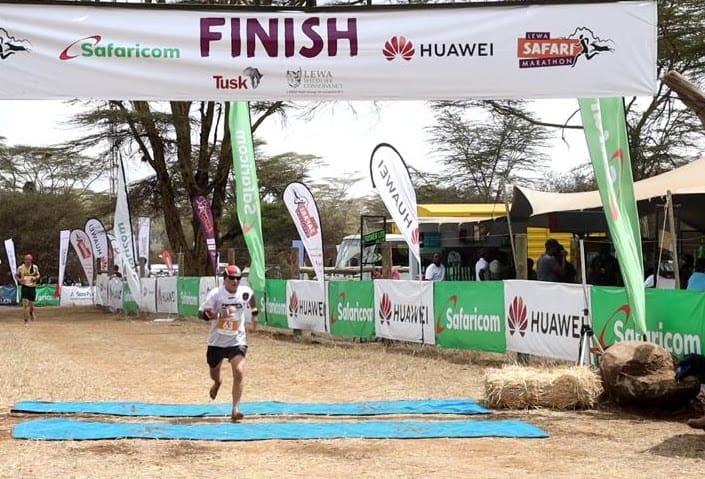 In an inspirational feat of endurance, Craig Oulton (former Dudutech board member), completed the full 42.2km Lewa Safari Marathon ‘22 barefoot in just under 5 hours. Craig said he took on the barefoot challenge to raise funds for “Sports4Change, a wholly Kenyan charity organization that sponsors the education of orphans and other bright and deserving students in Kenya.”

Competing in the Lewa Safari Marathon is a must-do experience for runners around the world. The race takes place on an undulating course through northern Kenya’s majestic Lewa Conservancy, with endless landscapes and spectating wildlife. However, as marathons go, Lewa is considered one of the most difficult in the world. 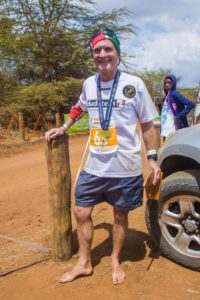 According to Craig, who has completed it 7 times and 3 barefoot, the marathon has its own particular set of challenges. The Northern Kenyan environment is inherently a tough place to run – the hot dry weather, high altitude, rough terrain and wildlife dangers are major challenges for participants, let alone anyone without trainers.

“My main concern was breaking toes, which I did on my last attempt…” Craig said, “thorns are also an enemy which forces you to be very aware of your footfalls barefoot. The biggest issue is how hot the ground gets, it literally burns your feet.”

As an experienced runner who regularly participates in full and ultra marathons, Craig said exhaustion and fatigue are expected. “I was not worried as I have run marathons before”, he said, “and I know what my brain and body are telling me… I generally ignore this and keep going.” 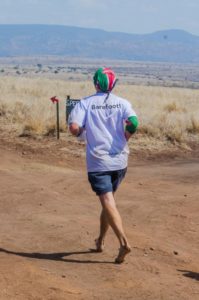 Craig running on the hot ground in Lewa.

“Training is so critical if you don’t do the mileage you won’t finish on the day,” he stated, adding that the practice strengthens his feet, ankles and pads. Without proper training, Craig risks serious injury.

One of the particular joys of running the Lewa Safari Marathon is experiencing the wildlife on foot. “It was amazing. As soon as we set off, we had three rhinos 2 km out. Lots of buffalo and plains game. Later in the run, about 3 hours in, we had a huge herd of elephants in the marsh. The spotter planes, a helicopter and rangers, both in cars and on foot, did a brilliant job of keeping us safe.”

Craig dedicated this barefoot marathon to raising funds for Sports4Change, a Kenyan charitable organisation which helps provide bright and deserving kids access to good education. By rallying Dudutech and other donors Craig raised Ksh500,000 for Sports4Change.

To find out more about Sports4Change and Craig’s barefoot marathon, go to https://www.sports4change.org/cause/school-fee-fund/. Donations are still open, please consider supporting this inspirational cause. Watch the Sports4Change video made for Craig!