Archive for the ‘Beneficial Insects and Predators’ Category

The War on Red Spider Mites 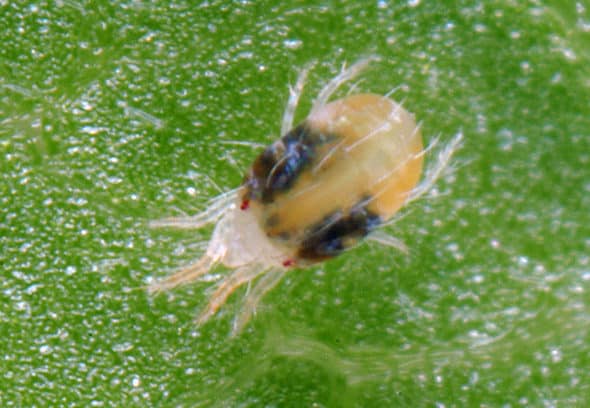 Despite their tiny size, red spider mites (Tetranychus urticae) have a big impact on global agriculture, causing extensive damage to a wide variety of plants and crops and they have a terrifying super-power. These tiny super-pests are potentially resistant to the narrow range of available acceptable pesticides. However, the agriculture industry has minute but powerful weapons to fight the mites – biological controls (or biocontrols).

Biocontrol is a branch of Integrated Pest Management (IPM) on the forefront of scientific advances in long term agricultural sustainability using the pest’s own natural enemies against them while reducing reliance on chemical pesticides which can harm people and the environment.

Dudutech, an IPM company based in Naivasha, Kenya, has over ten years experience in designing and developing biocontrols used in the management of red spider mites in large scale agriculture. In particular, Dudutech has successfully developed two powerful biocontrol products: PHYTOTECH® and AMBLYTECH®.

PHYTOTECH® is a highly targeted biocontrol which deploys the beneficial mite Phytoseiulus persimilis, which actively searches for and feeds on red spider mites in all lifecycle stages. Once PHYTOTECH® has cleared pest, they either leave in search of more food or eventually die off. This makes PHYTOTECH® a precision weapon in the war against red spider mites.

Similarly, AMBLYTECH® is also a natural enemy of red spider mites, but the beneficial mite Amblyseius californicus are able to go for long periods without feeding. Although Amblytech prefer to feed on red spider mites, they also feed on Thrips and nectar. This features allow AMBLYTECH® to be used preventatively, protecting plants from red spider mites over longer periods of time.

When growers use PHYTOTECH® and AMBLYTECH® they harness the power of nature to sustainably protect their crops against red spider mites. Without the harmful chemical pesticides in their growing practices their crops are healthier, pre-harvest intervals are reduced to zero and pesticide resistance is avoided.

Red spider mites also known as two-spotted mites, or scientifically as Tetranychus urticae, are arthropods which use their needle-like mouthparts to feed on plant tissue, causing yellowing or greying on leaves. If not brought under control, they can cause plants to completely lose their leaves. When T. urticae feed on flowers brown speckles appear on the petals.

Red spider mites have a lifespan of up to 16 days and peak hatching occurs at around 27°C, developing from an egg into an adult, reaching around 0.4mm long, within 8 days. Each female can lay up to 20 eggs per day – this rate can see their populations balloon within a short time frame.

T. urticae feed on more than 200 different species of plant and are regarded as highly economically important, due to their destructive impact on global agricultural produce.

Growers in Tanzania can now benefit from a range of Dudutech’s biological pest control products. The portfolio approved by Tanzanian authorities includes beneficial mites and fungi used to sustainably protect crops against Thrips, red spider mites and root knot nematodes. The products, traded as BEAUVITECH, MYTECH and PHYTOTECH, enable flower and vegetable growers to harness nature to protect their crops in a sustainable, environmentally intelligent way.

These solutions were specially designed and developed under a “by growers for growers” mantra to provide farmer-focussed alternative approach to crop protection. In the past, farmers relied heavily on chemical pest controls which are potentially harmful to the environment, people and long term economic viability of agribusinesses.

Thrips, red spider mites and nematodes can be difficult to effectively manage using chemicals alone. This is due to a confluence of problems compounding challenges such as resistance management, market restrictions, non-target effects and safety restrictions. When these issues arise, farmers suffer lower productivity, reduced plant quality and increased costs. Using biocontrols addresses each of these while protecting the long term future of growing and selling crops.

PHYTOTECH is one of Dudutech’s flagship biocontrol products, it deploys specially reared beneficial mites called Phytoseiulus persimilis, powerful natural predators which actively hunt and feed on red spider mites including their eggs, nymphs and adults. PHYTOTECH is safe to use and does not face natural resistance issues, unlike many routinely used chemical controls.

BEAUVITECH contains spores of a specially developed entomopathogenic (insect-killing) fungus called Beauveria bassiana which naturally targets Thrips in vegetables and flowers. When the spores come into contact with the target, they attach and penetrate the insect before feeding on internal tissue, killing the pest. Spores then emerge from the cadaver, ready to attack a new host. The formulation was designed to allow farmers to apply the product and safely interact with the crop immediately after spraying.

MYTECH contains formulated spores of Paecilomyces lilacinus, a nematophagous fungus which traps and digests root knot nematode adults, juveniles and eggs in the soil. MYTECH spores attach to a target nematode then form mycelia to trap it before invading and feeding on the host. The spores then emerge to continue the lifecycle on a fresh host. MYTECH is applied to the growing medium using drip irrigation or spray equipment to allow the fungal colonies to easily spread through the soil to infested regions in the crop. Chemical controls for root knot and other pest nematodes often harm beneficial non-target macro and micro organisms living in the soil around the crop roots. By using MYTECH growers can manage root knot nematodes without damaging the natural soil biome which crop plants rely on.

What this means for Tanzania

Livingstone Chepukel, Dudutech East Africa Sales Manager:
“Tanzania’s agriculture sector is large and growing but farmers face major challenges in sustainably protecting their crops against pests and diseases which ultimately impact on access to external markets and their bottom line. Dudutech’s entry into the market is an important step forward in securing the long term future of the agriculture industry in Tanzania.”

DIGLYTECH® contains live adult Diglyphus isae ectoparasitic wasps, which are used in the management of leaf miner in all larval stages, but the second and third stage in particular.

PHYTOTECH ® contains a predatory mite Phytoseiulus persimilis marketed for management of the two-spotted mite (Tetranychus urticae). The predatory mite is specific to spider mites and consumes all stages of the spider mite. The adults as well as protonymphs and deutonymphs predate on spider mites.

AMBLYTECH C® contains Amblyseius cucumeris a predatory mite used for the management of Thrips. It targets various species of Thrips preying on hatching eggs and larvae.

AMBLYTECH® contains Amblyseius californicus a predatory mite used for the management of Red Spider Mites (RSM). It eats all stages of RSM but prefers younger ones. Amblyseius californicus can also be used prophylactically as they also feed on Thrips and pollen and can survive for up to 3-4 weeks without food and therefore very good for prophylactic treatments and maintaining low populations of RSM.

AMBLYTECH® can be used with PHYTOTECH®  (Phytoseiulus persimilis) to manage RSM; the latter is good for hot spot treatment.